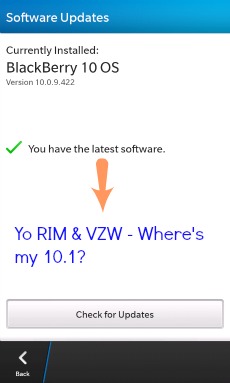 The iCult has done a magnificent job of creating iCulture - RIM had this once, but it lost market share when it became a slacker. Now that it got back in the boat after falling out and almost drowning, its having problems recouping its foothold.

Brand loyalty is a funny thing, we 'adopt', latch on to and defend our favorite products as if we owned the company. They become part of our own identity if marketers have done their job well and appealed to our emotions, as well as our wants and needs - and it doesn't matter what the product is - tools, vehicles, appliances, food, electronics, or in this case a mobile device.

Those highly loyal to other brands will be naysayers regardless of objective reality:

No, these sneakers are better because they are made by XYZ.

My ABC TV lasted 15 years, I would never buy any other brand.

JKL understands what I want, why waste my money on something else?

Regarding today's reporting that BlackBerry 10 is not a hit; stock nosedives 26%and Research In Motion's ability to win, float, or lose, there are two different issues that concern me.

One is the device itself; after a lot of research and testing of devices I decided to go with the Z10 - simply nothing compared when I held it in my hands and operated it and over 20 other competitor devices. As a consumer, I'm interested in highly reliable communication, productivity and social media capability and apps, not Zelda. This device got a 9 out of 10 on my personal rating scale (9 only because of the unavailability of Skype which has now been addressed with the upcoming OS update, inability to re-size photos, and a couple of other unavailable apps I did find suitable alternatives for).

I'm very satisfied with my user experience - though I'm chomping at the bit for Verizon Wireless to release the new OS update that will enable even more functionality. I don't think they schmooze carriers enough.

Arriving late to the party can have consequences

The other concerning issue is the company. There have been obvious problems in leadership, innovation, R&D and strategic marketing. Yet, whether RIM is able to truly rebound, remain solvent and viable, or ends up being acquired, is rather immaterial to me as a consumer. Though shareholders, employees and the Canadian government may feel differently than I do as a consumer, I am not as brand loyal as much as I just want a product that I like and can depend on.

I'm disappointed to find that PlayBook will not receive an update to BlackBerry 10 and will write to the company today to voice my concern over continued updates and support.

I hope RIM has learned from hard lessons in sufficient time to apply the learning and is willing to to do what it takes to rally brand advocates and convert new consumers. Alicia Keys surely didn't come cheap as the face of BlackBerry 10 - but the verdict on whether that marketing strategy is strategic enough is still out with the jury.

Nice posting Karla. I have a BB 9000 that my employer provides. It’s a great device. The keyboard is out of this world great for typing anything…the virtual keyboards (I’ve tried three different ones now) on my Samsung GS III pale in comparison. The resolution is outstanding, the touch screen responsive and it has decent (but not outstanding) battery life. So why don’t I have a BB for personal use? Blame HP. My previous personal phone was a Palm Pre, which I really did like, all be it the device was meant for someone about half my size (aka it was small). When HP killed Palm that pretty much killed my desire to ever again buy a phone from a company that might not end up being around. Hence while I like BB devices, I don’t want to end up in the land-o-no-support.
BB’s future? I wish I could be an optimist here. They seem to be holding on based on their still somewhat lock on the employer-provided device market and their private network. However, the scales are tipping on that one too, as many employers are now encouraging “BYOD” (bring your own device), which companies such as Good helping to make it possible. In my group at work, about a quarter of the team now has stopped using BBs and are now using their own devices. That’s not going to stop.
Waterloo in Waterloo…

StephenAlbert1 I’m all for BYOD – that way everyone’s happy! I have that same arrangement in fact. I have insurance on my device and if there comes a time there is no longer support then my position is that Verizon Wireless is just going to have to let me have a Samsung Galaxy 4.

I am definitely in the “personally against” BYOD camp. Why? In my business, litigation is sadly not an impossibility. Depending upon configuration, a BYOD device could end up being subject of a subpoena on the part of a plaintiff’s attorney, which means that a BYODer could potentially be without a phone for an extended period of time as it sits in an evidence locker. That’s strike 1 Strike 2? I like the idea of some separation between my personal business and my professional business. Granted the two do intersect, but by and large it’s nice to know that there are some things in my life I don’t have to share (with an employer).
Thanks again for the opportunity to “geek out”.