Almost daily challenges like relationships, personal finances, health, and natural disasters, are often enough to make or break your concentration and performance on the job.

What about other factors?

Though every decade I have worked had its share of trauma, nothing has professionally impacted me as significantly as people who had to deal with the Great Depression or WWII in Europe. Or, people in the current war zones of Iraq, Iran or Syria. I have always been fortunate enough to find other jobs, be able to freely operate, relocate, and do whatever I needed to do to make life work. I don't know how those people cope. I guess you can't until your own feet are in those shoes. But I do have an inkling...

Here are some times politics and global affairs played a role in my employment:

Reading communiques during the Iranian Hostage Crisis (1979-81) in a subterranean Comm Center at a NATO Air Base in Germany, I feared the real possibility of chickens falling from the sky. Then in '94 I sweat bullets on the beaches of Cozumel when the Mexico Peso crisis hit. I had a student loan and car payments due back in the States in Dollars and overnight it cost 3X more to buy them (luckily I owned a business where tourists could pay in US Dollars). In 2001, the terror attacks of 9/11 affected the American psyche in many ways, not least of which the economy. Having just returned to the US, I worked at a commission only job selling timeshare in the Poconos and it was going very well, very profitable - until the day it dried up before my eyes and I had to walk away. Last decade saw the Great Recession, where economic development was at a standstill, and my job in that industry was eliminated.

Trying to eek out a living, and meet basic needs for you and your family during trying times is hard.

And now, in this decade, the new administration of the US Government has at least half of us concerned about its integrity, functionality, and our future. If you're in Europe, well, you have a whole other set of parallel problems. And, in this fully blossomed age of always on digital communication and media, especially if you have enabled breaking news alerts on your digital device - unless of course you aren't tuned in or you turn it off, there is no limit to the impressions your brain receives of constant worrisome political concern.

You can't keep politics out of the new workplace.

The American Psychological Association published a survey in September, 2016, about the effects of discussing the election in the workplace. While the findings and analysis indicate that many people found allies in co-workers with similar political views and it enhanced their working relationships, other respondents found their stress levels, ability to remain positive, and performance negatively impacted.

Younger employees seem to suffer the most, 1 in 4 felt stressed out because of political discussion in the workplace.  Reflecting gender norms, the analysis also points to women being less apt to get involved in political conversation in the workplace. Men on the other hand couldn't resist the temptation and were left to suffer more of the negative effects. These trends do not surprise me. What surprises me is that I didn't see any stories of partisan workplace violence. 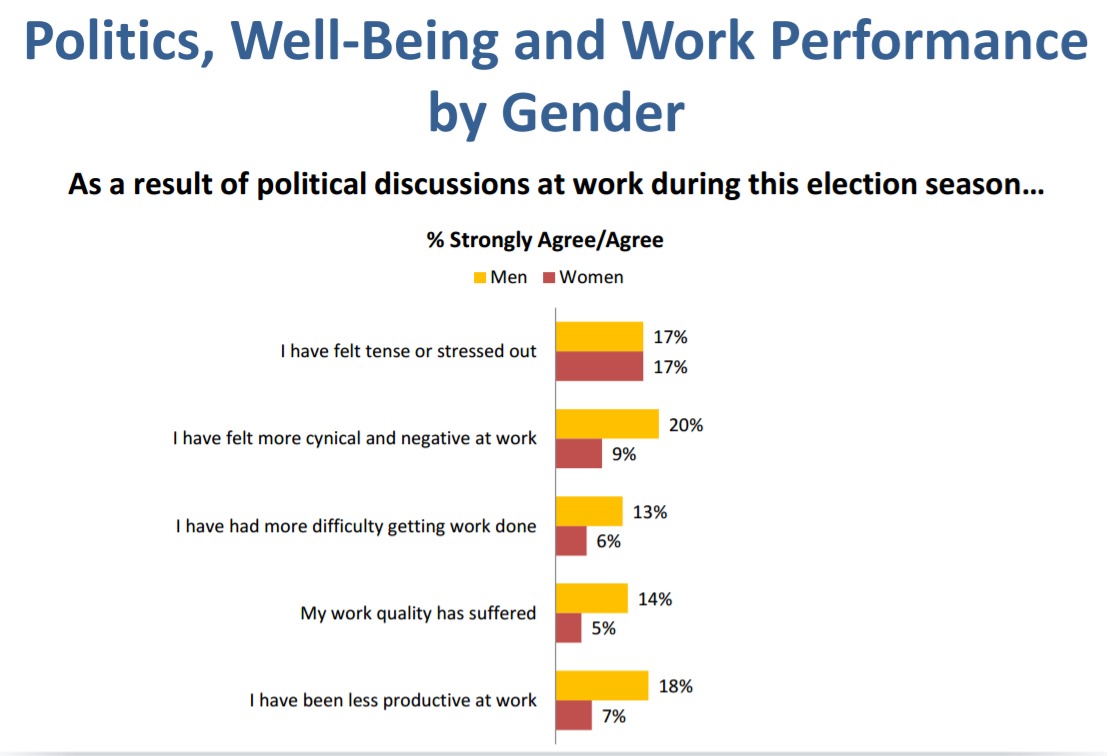 What does this mean for workers and employers?

All we can do is read it and wonder, and even in the face of additional stressors, try to stay focused and professional at work. Remember the lesson we were all taught in elementary school gym class - it's not about winning or losing, it's about how you play the game.

Have you noticed a decline in your company's productivity, or even your own, due to politics? Comment below!