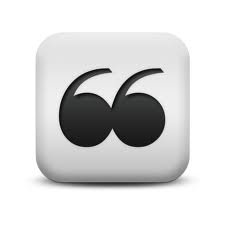 I don't know about your social media friend feeds (well, actually I do) but mine look like The Quotations Pagethese day - posting OPQ seems to be the thing to do. Take someone else's brilliant little thought and post it around because you like or agree with it. Chronic quoters get a big bang for their freebie when they have all their social media accounts linked together or use a multi-client simulcast application that spiders each copied quip through the Interwebs like the Bubonic Plague.

The result is groundhog day. Everywhere you click it's like a ritual; Facebook, Twitter, and all too often errant integration to LinkedIn ... The same post by the same people on every network. It's flat, unamusing, highly unoriginal, clogs up channelsand turns social streams into parking lots like PA Interstate 81 S in this era of unrelentlessAmerican Recovery and Reinvestment Act construction that never seems toyieldresults.People even post images of quotes on Pinterest and flickr. It's beguiling to me.

It's not to say that the words of philosophers, politicians and old and new age gurus can't hold some salt, but instead of just playing whisper down the lane - why not rip one apart and analyze it, explain why you dis/agree, talk about the impact it has had on your life, why every single human for eons should take it to heart and live by it, or why the author is unstable?

You figured out I'm about to do just that, right? Here are 10 quotes about the world of work and my takeaways.

1. Hard work never killed anybody, but why take a chance? - Edgar Bergen

By this logic, many more people should be immortal besides those kids in Twilight, though there is much truth to this. People who tend to make work their life tend to have high blood pressure, stress and lots of anxiety. I wonder if Edgar and Charley ever really thought what they did was work or play.

2. When your work speaks for itself, don't interrupt. - Henry Kaiser

OCD types have great difficulty with this. Better to wrap it up, call it a day and go swing on a hammock with a pia colada while basking in the glory of your accomplishment - rather than nitpicking and regurgitating it to death making people sick of you.

3.Our great weariness comes from work not done. - Eric Hoffer

I'm pretty sure it usually comes from procrastination. After all, all that thinking and stress are hard work and tiring. I'm also fairly certain I should be a size 000.

4.Getting fired is nature's way to telling you that you had the wrong job in the first place. - Hal Lancaster

Not only does job fit play a role, but so do your personal life, mental and physical health, Facebook relationship status, irritatingco-workers and inept boss, what you had for dinner yesterday - and a million and one other contributing factors. Yeah Hal.

5.All things are difficult before they are easy. - Thomas Fuller

I just don't agree this should be some blanket rule as I find myself reflecting on the 3 days I spent on the rubber band line at the old Eberhard Faber plant in Mountain Top, PA. Day 1, interesting. Day 2, challenging. Day 3, painful. See, it just got worse as the minutes ticked away on the clock. For the uninitiated, I blogged about it in November.

This doesn't have to be 'chicken or egg' and isn't rocket science Don. Volunteer Intern with a nonprofit. They typically can never have enough help or resources. It will reflect brilliantly on you in your rsum and social profiles and during your interview. In fact, forever.

Reading Al's quote got me allincensed and I figured there must be something wrong with him, a hard core right-winger most probably. So I checked out some of the other insightful things that have dribbled out of his corn hole like this and confirmed my suspicions, "Like all New York hotel lady cashiers she had red hair and had been disappointed in her first husband." Andy Capp was more intelligent and less biased.

8.It can be liberating to get fired because you realize the world doesn't end. There's other ways to make money, better jobs. - Ron Livingston

I'm such an example of this, kind of... I thought I had the best job ever. I wasn't 'fired' but I was downsized and ended up with really the best job ever. I know a few other people this has happened to as well. However, for the majority it doesn't. People are overwhelmed and overcome with anxiety, financial distress and the need for immediate week to week cash. They have never been able to accumulate an emergency cash reserve and that frightens the bejezus out of them.

9.If you put all your strength and faith and vigor into a job and try to do the best you can, the money will come. - Lawrence Welk

If Lawrence were alive today I would tweet him that this just isn't so. When this past wave of joblessness hit I met people in the unemployment line with 30+ years of service and loyalty to their employers. And a pink slip. And the inability to get another job at the same wage they were downsized from due to compounded annual pay increases. Stick to tickling the eternal ivories Larry.

10.It is your work in life that is the ultimate seduction. - Pablo Picasso

Pablo knew, "When I was a child, my mother said to me, 'If you become a soldier, you'll be a general. If you become a monk you'll end up as the pope.' Instead I became a painter and wound up as Picasso." He was a poor student who lived doing what he hungered for and lived till 91. He recalled, "for being a bad student, they would send me to the 'cells'& I loved it when they sent me there, because I could take a pad of paper and draw nonstop."He stands alone as the most celebrated and influential painter of the twentieth century. His technical mastery, visionary creativity and profound empathy distinguish him as a revolutionary artist.

My top takeaway is that all those people out there, who have ever been and ever will be, that are quoted say things like Picasso, and of course Confucius -"Choose a job you love and you'll never have to work a day in your life,"are the ones who find the golden goose egg. And those are the quotes to teach your children.

If I had a child, I would get some word art for her bedroom wall with those words on it, drill it in a pleasant way into her head. Let her know her passion should be her opportunity to contribute to the world and her own well-being. I would do everything possible to encourage her and help her explore and develop her aptitude and talent so that one day someone could quote her saying that she chose a job she loved and never felt like she worked a day in her life.

P.S. You need to know that if you click on that wall art link and end up buying some you'll be putting a tip in my jar as well as helping to change a child's life for the better =)

Nice post Karla, I am also annoyed by the endless tweeting/updating/linking/pinning/whatever of quotes. I really like how you took quotes and analyzed them, great idea!

Here’s what think about a proverb “hide the hay it’s time will come” everything i saved for later ended up in a closet or forgotten. So i embrace the thought dont keep what you dont need

@EkothekochYes, being a hoarder of material items or knowledge is pretty silly.

Previous article
10 Tips for Success on LinkedIn
Next article
How do you tote your Gigabytes?