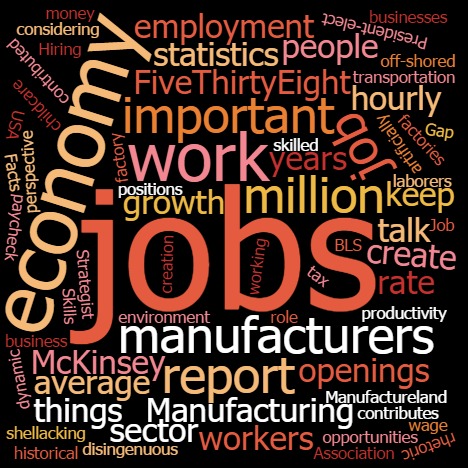 I am, to say the least, lathered up about the election results. As if the winner wasn't enough of a startle, minute by minute the situation gets worse not better - Steve Bannon will be Chief Strategist, and Laura Ingraham may be selected as White House Press Secretary. I feel like the country is about to get a shellacking of historical proportions, of which many books and movies will be made.

Is there anyone here who legit thinks things will be great that would pass a lie detector test, who isn't related to the President-elect, isn't in his inner circle, or isn't part of the 1%?

In the meantime, FiveThirtyEight put out a post today entitled Don’t Blame A ‘Skills Gap’ For Lack Of Hiring In Manufacturing. It's timely, because one of Trump's big campaign promises was to bring back sewing and shoe factories.

It's time to blow this beast out of the water

It's true, about 700,000 jobs were lost to NAFTA, and it did take awhile to recover them - but they have been more than recovered, at an average of 200,000 per year since it was signed by President Clinton in 1994. The FiveThirtyEight article cited the latest manufacturing statistics for the recently released July BLS report, indicating 379,000 jobs posted by manufacturers. That's 280% growth in manufacturing jobs since the recession ended 7 years ago.

The talk about bringing these old jobs from years ago back is outdated and misleading. Manufacturers who offshored are not moving back home anytime soon, no matter the import taxes that may be imposed on them if they don't. They will focus on exports to other countries rather than incur the costs of reshoring, and exponential labor costs. They would lose their ability to be competitive in the marketplace.

So, while job creation is always a good thing, pushing manufacturing jobs to the top of national agenda seems somewhat disingenuous.

Talking about those factory jobs, I know several manufacturers who cannot find people who:

I'm not saying manufacturing jobs no longer belong in the US. They remain an important part of the economy. In fact, the National Manufacturers Association has published its Top 20 Facts about Manufacturing, among which include these important statistics:

It's also important to recognize that, "Manufacturing's role is changing. The way it contributes to the economy shifts as nations mature: in today's advanced economies, manufacturing promotes innovation, productivity, and trade more than growth and employment. In these countries, manufacturing also has begun to consume more services and to rely more heavily on them to operate." McKinsey Global Institute

The McKinsey report is talking about us. We have evolved to a knowledge based economy and service sector. So, let's keep things in perspective, get educated about the shifting dynamic, figure out how to provide employment opportunities for all the diverse working age individuals who want - and need, to work, and maybe not believe all the rhetoric.

On the last business day of September, there were 5.5 million job openings. 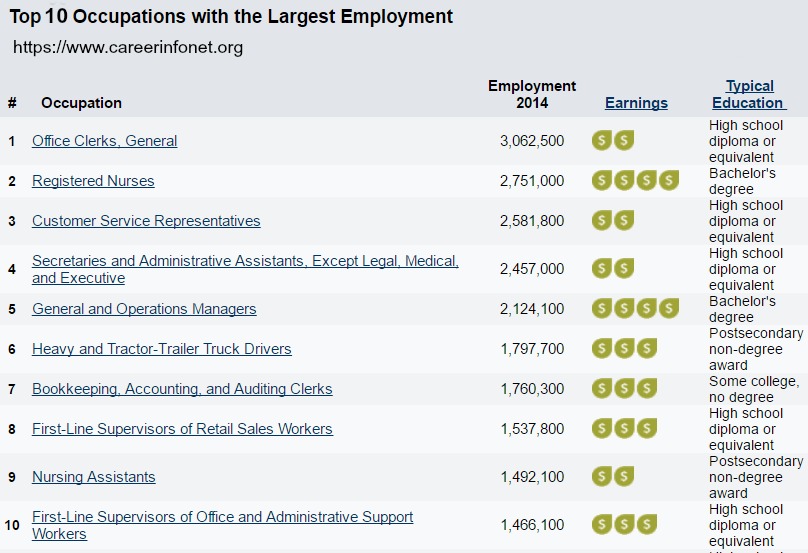 Deporting a few million unskilled laborers would artificially make the jobs report look even more robust with all the openings that would create - though it would create a whole level of minimum wage jobs that most US born workers will not want. Maybe we'll end up like Saudi Arabia, offering work visas for domestic and unskilled labor, from Asia. Trump is already good at that, he imports workers for his Florida properties, claiming a labor shortage of US workers, while touting the need to create more jobs. Here's a thought, maybe we should just give the people already here a chance to work legally, rather than incurring the expense of deporting them and then bringing them back.

Can you afford these shoes made in the USA? There is no way tax credits to businesses will filter down to your paycheck that much (let's be honest - if at all).