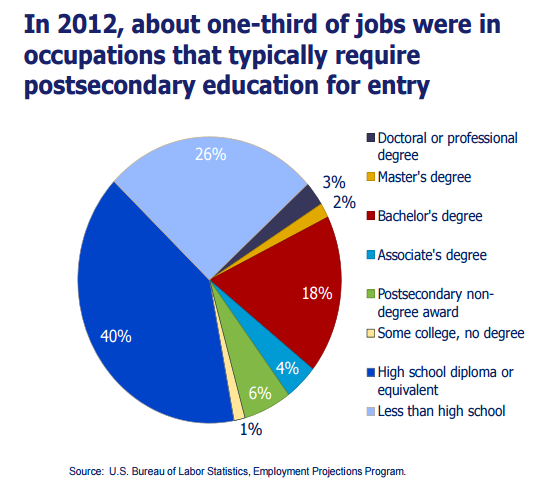 The chart to the left reflects where the jobs are.

Apart from the fact that minimum wage jobs are usurping the jobs market at warp speed, college tuition is off the charts, and jobs requiring college degrees are in decline. All this, just when at last college enrollment is at an all time high for women and minorities hedging toward labor market and income equality.

66% of jobs projected through the next 7 years of college graduations will only require a high school diploma or less.

People behind the movement to increase minimum wage significantly - so the 66% could actually live on it without needing support from public welfare, are dismissed as left-wing socialists. A significant population 'believes' free market economy will adjust and everyone will live happily ever after - but the math just doesn't add up that way.

Federal government and contractors were mandated to increase minimum wage to $10.10 per hour. But there is an incredible amount of backlash and obstinance on the part of states to mandate a real living minimum wage for non-government work. Georgia and Wyoming make life just about impossible for service workers, paying them just over a Lincoln an hour. It should be totally illegal to pay someone $5.15 per hour. There is no place in the US with a cost of living that low.

If the near to mid-term future of employment is to remain one of a majority of opportunities to be in the service sector and at minimum wage, what should be done to stop the mass increase of 'working poor', many of whom with college degrees, saddled with debt who must ask themselves - Pay rent and eat food or make a worthless college loan payment?

If the minimum wage had kept pace with productivity, it would be more than $16 per hour today. It is only the greed of the few, and the political disenfranchisement of the majority, that has kept the minimum wage so low. - Bernie Sanders

There is a long list of bills that died in Congress that aimed to at least in part remediate the financial cliff youth walk off after high school. In the past few years, the Pathways Back to Work Act of 2013, Youth Jobs Act, and Employ Young Americans Now Act, among others, were all swept under a rug. What message does this send to youth?

Why go to college, most jobs only require a high school diploma?

Why go to college, you might not land a job that will pay enough to let you pay off the loan?

Why go to college here when an enterprising young person can get a degree in Germany for free? Maybe they will like it there so much they'll create their start-up there when they graduate. That can't possibly be what we want.

What is there for youth to be motivated about their future, in all honesty?

There are calls to make tuition at all US state universities free, and more states to create innovative programs like the Tennessee Promise Program, which provides students two years of tuition-free attendance at a community or technical college in state. Programs like these should provide incentive for more US based start-ups and incubator programs across the country which, for those who are successful, would lead to job growth of semi-skilled / skilled, higher than minimum wage positions. States that offer these programs should suffer less brain drain, and reap more rewards of economic development. But, if legislators are continually opting to vote out these types of initiatives in favor of allowing big business to vote in their own... well, no need to hold our breath now is there?

College is not a realistic option for everyone, no one should pretend otherwise. Not everyone has the intellect, focus, interest or drive, and quite clearly as statistics show, tons of people are cooking at home less, living longer, and the US needs more service workers than ever. A job for everyone, everyone for a job, is a good philosophy - but no one should have to hold their head up high and provide exceptional customer service on the job and then have to drop it because they are standing in the welfare line at the end of their shift.

The Employ Young Americans Now Act will provide $5.5 billion in immediate funding to states and localities to employ one million young Americans between the ages of 16 and 24, and provide job training to hundreds of thousands of young Americans. The legislation also allocates $4 billion in grant funding to the U.S. Department of Labor to create summer and year-round employment opportunities for low-income youth and another $1.5 billion in competitive grants for work-based training. - Rep. John Conyers, Jr.

Previous article
Motivational Quotes vs Reality
Next article
Is Your Destination Attractive to the New Workforce?