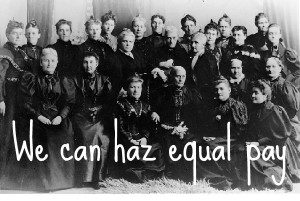 The Glass Ceiling Act was was enacted with only minor changes as Title II of the Civil Rights Act of 1991. Four years later in 1995 a 257 page report was produced, the result of a 21 person panel (76% female).

The statistics reported at that time showed that equality in Corporate America was a mess and the prognosis in the report predicted little if any improvement in the near future. The research found relatively few women and minorities in the pipeline positions most likely to lead to the top. There was little hope for women and minorities in critical career paths for senior management positions which require taking on responsibilities most directly related to the corporate bottom line.

Look at those questions and change the wording around a little bit. Personally, I see a lot of paralells.

So, it irritates me when I hear moaning like

If I hear the clich seat at the table one more time I'm gonna puke.

What if I just want to be average?

I want to puke. Because we gave up. It's our own fault. We shouldn't have to over compensate, overcome stereotypes, work for less or work harder to get the same.

But the fact is... oh yes we do. It isn't going to fall unto us like manna from the sky. The government passed ammendments and acts and we still don't have it. It's not even easy to fix like other difficult to achieve milestones that just required a vote. Face it, Women's Suffrage was a 70 year struggle.

I also know that boys are taught through tough love and contact sports to be aggressive and competitive from a young age and girls are taught to "play nice" with dolls and stuffed animals - it's all training for primary rolls in life. And when it doesn't turn out like our societal conditioning has mandated forever, that girls should be submissive and boys dominant -girls are bitches and boys are sissies.

I'm not a mother but if I had a child I would be reading her bedtime stories in another language, word problems, making games out of memorizing all the bones in the body. She would study martial arts and I wouldn't be reading her fairy tales about being saved by knights in shining armor.

Why mask reality and then be surprised at the outcome?

We're always talking about best practices but we have a really small lens we look through when we look at the map. We won't take into consideration models of flexibility, extended maternal leaves for births, daycares in workplaces, real vacation time and time to take it from countries where it works any less than we'll accept the truth that it is nothing short of a crime for the richest country on earth to have homeless people living on the streets and an infant mortality rate that's inexcuseable.

There's a lot of Stockholm Syndrome going on, we need to wake up and I'm just getting warmed up...

Yes, Karla, we can! Join in the outcry. Say something like Karla has here (and over there, on ERE). Don't be afraid. They might bite but it won't hurt. Remember, right is might.

I'm burning my bra as we speak, Karla!

Seriously though, my mother was always adamant about the fact that I be savvy enough to rely only on myself. She didn't want my life to revolve around having a man because in her life, they hadn't done jack. She taught me the lesson early that men don't like it when you say they aren't playing FAIR. She taught me to stand up for myself and not to apologize for it. If the men don't like it, point out how UNFAIR they are being and watch the atmosphere change.

Well, it's not 100% true in all situations but I have found that in most cases, it works. I have never been apologetic about being aggressive in business. I'm a peace, love & happiness gal but you mess with my money or my future and we're gonna go rounds.

Great post, Karla! I think some women need a reminder.

Another Great Post Karla~
This topic really get's me “fired up”. Hillary Clinton put 18 million cracks in the glass ceiling, but we need to shatter it together.
Let's keep this converation going! We need to lead to change, and change to lead…
Well done

@maureensharib Thanks for starting this, the importance cannot be overstated. You would think between ere and here it would get a lot of attention, instead it's getting apathy… what's wrong with our gender? Maybe it's us? Maybe the fight is over and we lost and some of us can't accept it?

@imjustagoyle I hope it wasn't an expensive La Perla or even Victoria's S. I'm a peace, love and happiness girl too. That's why I love you.

@Shennee Hillary couldn't pull it off. She still hasn't figured out how to manage public perception. Of course, it's uncharted territory so I'll cut her some slack. I'm disappointed though. She ticked me off when she stayed with Bill for personal and professional gain to appeal to conservative dems.

@karlaporter You would think – but don't get discouraged. This is a tough topic – females who want to speak out don't for fear of retaliation in the workplaces of the jobs they need the paycheck from and (most) males don't because…why? It profits them not to! Why give legs to a subject that deserves it if it's going to take money out of your pocket somewhere down the line?

It's a catch-22 women are caught in. Most women live hand-to-mouth and are afraid to rock the tiny boats of their security in a mighty and fearful sea.

The fight is over only when it leaves us. I don't think we've lost the war – maybe some battles – there is no shame in that if we continue the campaign. Churchill said:
In war, resolution; in defeat, defiance; in victory, magnanimity.

What a wonderful, magnanimous world it would be if women ruled it.

Hey Maureen, this is a great conversation that I hope continues to gain steam. Actually I don't need women to rule the world though, I need them to be respected as co-rulers for the talents they bring to the table as business partners and leaders and not treated as coffee fetchers and errand girls. XXOO Karla

Always an interesting topic. I feel nervous (OK scared) typing here. Can I ask one question though? Who is the war against? Who is denying the “seat at the table?” Men? or all society? I'm not stirring the pot, I just need to understand

Dan, please don't be nervous. This isn't a place for male bashing it is for community and respectful dialog, I'm glad you decided to be a part of it. Your question is especially interesting to me. You come with a perspective I am little familiar with. I have no idea if there is a gender based disparity in pay in Australia. However, there is here. Women earn about 77 cents to the US dollar. It is a huge issue and one women (and minorities) can't seem to shake. Of course there are women who do earn as much as their male counterparts but that's not the norm.

Your statement is brilliant… “I can't understand how/why people with same skills and experience would get paid differently”.

We have a lot in common. Thanks so much for stopping by, come back again soon =)

Previous article
Thanks to gwabbit My Outlook is Brighter
Next article
Why Don’t I get a Call Back?