Here's the microwave version to catch you up.

In June a series of very serious events (on the scale of a tsunami) and an organizational restructuring happened at my place of employment while I was blissfully on vacation. I was liquidated in a two sentence email while I was baking morning biscotti. Let me tell you that in my entire career I have rarely seen downsizing handled with less finesse. Some companies actually tell you in person versus an email to leave your keys and parking pass on your desk at the end of the day.

Luckily I wasn't out of the country or even out of my house so I was able to run over and clear out of my office and leave that magic key on the desk.. Then I flipped the mental switch from shocked bisciotti baker to jobseeker for the first time in a long time in the ensuing days.

I won't tell you all the thoughts I had, though I'm sure some ears are still rightfully ringing. However, I cannot stress enough how fortunate I am to have returned to recruiting at a wonderful company just six weeks later. Five weeks in, I'm now a former night owl and thrilled to finally have adjusted my nocturnal schedule in order to be able to get up much earlier than I was accustomed to, at the crack of dawn actually, with 7-8 hours of sleep. It's been a rough transition to be sure, but thankfully well worth it.

For those of you who may have heard me say I would never return to corporate America.. whelp, it happened.

At the new job I was advised to have a second phone for my peace and sanity. I was resistant. Who wants to walk around like Annie Oakley with one in each hand and a bandolier full of chargers? At first I thought I could solve the issue with Google Voice for a second number on my personal cell phone, or an app like SideLine, but for a myriad of insurmountable system incompatibilities you don't need to know about, I relented.

If you've known me for a long time, you might recall I had a very difficult time giving up my Blackberry. I was a huge advocate and was one of the handful of people who actually plunked down the value of a major organ for a Playbook instead of an iPad because I really thought I needed a tablet.

When Blackberry started to slide into the abyss of darkness and Verizon stopped carrying them, I went Android. Some of my friends had weird problems with their iPhones and the nearest Apple store is 1.25 hours away in Allentown. I also felt that Apple had become snobbish and cultish since the Apple iic of my college days, and I just wasn't interested.

So they gave me an iPhone 6s.

I am trying... I bought it a nice case, a protective screen, a new car air vent holder. For the first 2 weeks I used only native apps wanting to have an open mind and see if I could like it as much as my still phenomenal Lg G4, which I hesitate to give up because new phones don't have removable batteries and I happen to find that a mega feature.. It was good for making and receiving calls and texts.

Week 3 I tried to make it faux Android by installing as many Google apps as possible. Meh... I don't like the user experience, and the fact there is no back button / arrow. I don't like that physical home button - why can't it be touch? Yes, the battery life is good, but it always is on a new phone. It doesn't help the email experience is less than optimal because the company doesn't use cloud based services. Talk about sticker shock... I have been Google Apps all the way for a very long time. To boot the laptop on my desk up and see Outlook almost made me cry. I did install an iCloud add-on in Outlook in order to be able to see my work calendar on the phone, and granted, some of these issues would be the same if my work phone was an Android, and there's more.... At this point I have rigged so much I'm beginning to feel like the Skipper on Gilligan's Island.

If you have successfully gone from Android to iOS and loved it I want to hear why in the comments. How did you warm up to it? Because most of the searching I have done seems to turn up a lot of people who just couldn't do it.. 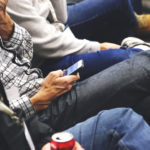 Conference Format in a Digital Society

What is the best conference format for 2017-18? Is it the traditional everyone converge on a hotel for a couple of days? Or, is it industry and topical meet ups, "unconference" style?