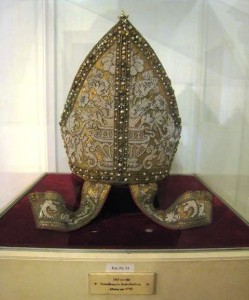 WARNING: This post is not meant to be offensive to anyone, it is a critical analysis of a leader and an organization in a very controversial spotlight that stems from my thoughts alone (OK, there may be some sarcasm and a bit of humor too). If you do not wish to entertain thoughts of critical analysis you shouldn't have clicked "Continue reading" and you are invited to exit gracefully without damage right now...

Without rehashing particulars of the 21st Century challenges of the organization the Pope represents, let's take a look at his effectiveness as an organizational leader from an HR perspective. After all, he just concluded a whirl wind visit to the UK replete with the prerequisite media hype befitting of a Head of State and Head of Religion - and it made me analyze him.

The organization the Pope oversees is headquartered in the Vatican, a country of an estimated population of 826 with an ecclesiastical government and legal system based on Code of Canon Law. It achieved full sovereignty from Italy in 1929, though the origin of the Papal States, which over the years have varied considerably in extent, may be traced back to the 8th century. Its military is ceremonial and hasn't been to war since 1095 (though there were conflicts from time to time throughout the 17th century). There is 0% poverty (or 100% - depending on how you look at it), 0% HIV and 100% literacy, everyone has access to excellent health care and is very well educated. Based on quality of life and without getting into assets, it is undoubtedly the wealthiest country in the world.

Under current executive leadership direction, the organization suffers from poor employer branding, high attrition, lack of candidates and low quality of member relations. The decline in membership has resulted in substantial profit loss, reduced ability to positively impact the communities it is located in, forced closure of satellite locations and unprecedented legal challenges stemming from inappropriate conduct of management.

The Pope has several options to re-engage both candidates and members of the organization. Throughout its history there have been many major changes made by the Pope (revision to the 10 Commandments, changed the sabbath from Saturday to Sunday, implementation of celibacy, additions and deletions to biblical text, change of the mass from Latin to local language, etc.), clearly demonstrating that this authority has no limit.

Several of the current Pope's policies are in conflict with societal norms throughout other countries in the world, to include those of Italy which surrounds Vatican city (which is of course really a city state, to be more correct actually a country). In the US, a country that has fought consistently for freedom and equality for all its citizens - since its founding, there is a clear gap in the values, ideals, policy and law that governs secular life and those espoused by the Pope's organization. This gap, which has been growing steadily without abatement over the past 40 years, is an indicator of the future for the organization he oversees if new policies aligned with competitive organizations, to include religious and secular factions, are not not adopted quickly and marketed aggressively.

Alternatively, organizations like this one come and go... It sure has had a good long run. But, maybe it's beyond damage control and its time is up. Maybe it's no longer relevant (like the Model T Ford). Maybe it needs a different leader, maybe a woman. Maybe it needs to get with HR policy and implement dependent benefits. What do you think?

It's OK if people are too squeamish to touch this one… but I'm not.

Brilliant assessment Karla. There is another often-underestimated factor at play here. Senior management has adopted a “looks like me, thinks like me” recruitment and succession planning strategy, which drastically increases their risk exposure when it comes to anticipating and responding to emerging issues. Operating with similar blind spots, the senior management team, of which the Pope is the de facto head, resort to the fire-fighting model of crisis management, in which their main objective is to preserve and protect the infrastructure.

Karen – Very insightful comments on the fire-fighting model of crisis management. The Pope likes hats… I wonder if he has a firefighter helmet in the closet?

Previous article
Workplace Fashionistas
Next article
Off Work Conduct Unbecoming of an Employee?