Lawrence H. Summers addressed the New America Foundation on the Presidents Spectrum Initiative on June 28. The topic was Technological Opportunities, Job Creation and Economic Growth. He announced that through this initiative, hundreds of thousands of jobs will be created.

I come here today to announce the Presidents plan to nearly double the amount of commercial spectrum available in order to unleash the innovative potential of wireless broadband.

This initiative will catalyze private sector investment, contribute to economic growth, make revenue available to the Federal Government, and help to create hundreds of thousands of jobs.

That's just what we need Lawrence (and Mr. President). But, before we can get there I think we need to look at something else. It's the principle that buildings without solid foundations are not well built. While job creation plans and execution get underway for the third wave of the Internets development: mobile broadband, a serious education reform needs to be considered in the public school system across the nation.

The STEM program needs reinforcement, additional funding, and it needs a hefty PR/Marketing campaign to make interest in these careers sexier. Take some of that government mint green paint off of it and start a national PSA campaign with Scientists, Mathematicians, Surgeons, Engineers and those guys from Apple and Google talking to kids about how important and cool their jobs are.

--> Addition: Thanks to Rufus for pointing me to Connect a Million Minds. I have to ask Why isn't this on TV everywhere?

How many people even know what STEM means?

K-12 is a feeder system for productivity in adulthood. Current education does not parallel the demands of the workforce today in in the US, let alone future forecasts. The July 1 NY Times article, Factory Jobs Return, but Employers Find Skills Shortage is a revelatory case in point.

Plenty of people are applying for the jobs. The problem, the companies say, is a mismatch between the kind of skilled workers needed and the ranks of the unemployed.

Baiju R. Shah, President & CEO of BioEnterprise is concerned. His nonprofit group in Cleveland trying to turn the region into a center for medical innovation. The problem, according to him, is that the unemployed in Cleveland aren't a match for the types of jobs that are open and growing. 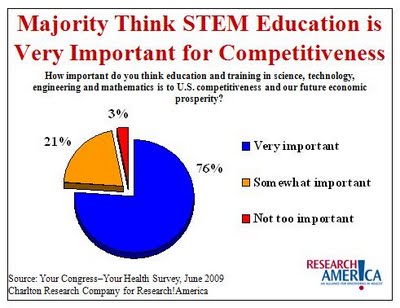 While my recommendation from an economic and workforce development perspective is that organizations research local workforce preparedness and skill sets before locating a highly technical industry in any given area, this will only be a fix for a short period of time. The projected growth of STEM based jobs like the ones that will result from the President's Spectrum Initiative, and those from the return of failed attempts at off-shoring, will require that all schools across the country inspire, engage and prepare youth for the new demands of the workforce.

There will always be a place for a liberal arts education - however, more emphasis needs to be placed on technical careers, math and science for us to regain and remain competitive in the global economy. What can you do if the schools in your community are asleep (and most are)?

Understand how standardized tests are used with children - ensure your children are tested and the results are disclosed to you so that you can help your child discover and develop a balance between interests and aptitudes.

Call your child's school Superintendent, attend PTA meetings, and talk to the Math and Science teachers. Ask what the school's STEM initiatives are and if after reading all the links in this post it doesn't seem your child's education is preparing them for the imminent needs of the workforce - identify other concerned parents and launch a local campaign in your county, region and state. Be relentless and demand a public school education for children that will provide them with a real opportunity for the future.

Remember it isn't 100% up to the school to prepare children for adulthood. It takes a village to raise a child.

When compared to other nations, the achievement of U.S. pupils appears inconsistent with the nations role as a world leader in scientific innovation. ~ CRS Report for Congress 2008

It may be because we are spending the extra recession time we have sleeping and watching TV instead of brushing up on skills. http://online.wsj.com/article/SB100014240527487…

Not sure if you've seen these PSAs from http://www.connectamillionminds.com/ but the general motivation to study STEM is to get back at everyone who's ever picked on you in school because you were a geek? *sigh* not sure that is a good message to point to as a parent. This is what “the village” comes up with and it does not help parents.

Rufus – I checked both of those links out and ended up joining Connect a Million Minds =) As for the extra 17 minutes a day people are wasting.. well – I say if you enjoy what you are doing (and it's not illegal) then it isn't a waste. In Fact, 17 minutes is the perfect amount of time for a power nap. I also learned I have male habits when it comes to household chores. I really enjoyed your comment!

Bravo Karla ~ really taken it up a notch with this post… Now, if you'll excuse me, time for a lil' Family Guy and a nap. Ha! Thanks!

Previous article
Do You Want Your Employees to be Happy or Satisfied?
Next article
NEPA It’s Time to Scramble!