Minorities have historically had to climb up the wage ladder in U.S. history. At the top of that ladder has traditionally been white men, until recently Asian males usurped that glory, graphed out below. However, overall white males still earn more than any other demographic in this country because of a variety of cultural and societal factors that go far above and beyond their sheer numbers in the workforce. I'm not blogging about this to place gender 'blame' - we're all adults here and we have things to work out. I understand there is denial on the part of some individuals to accept that pay inequality is real - yes, even when you compare apples and apples, not just averages.

Put your hackles down doubters and chill with me as we explore this controversial topic. Though it is beginning to erode among young women, those factors are well documented here and here, for example. I don't have all day to write this post to address every issue of disparity - it's a blog post not The Iliad and The Odyssey

. And, I haven't conducted any original research so I'm linking resources you can read yourself along the way if you want to really dig deeply into citizens ofcomparableeducation and experience earning (or not) comparablewages.

Here's what NYTimes.com had to say about apples and apples in the over $100k C-level employee in 2009 based on PayScale data analysis.

While that sucks, what I want to focus on for this post is that for many industries there is evidence that just one year out of school the gender wage gap is operational - yes readers, even for grads who had the same major. Shocking? It should be (and shouldn't be, given our national history of minority groups having to fight for and crawl out of inequality of just about everything at one time or another). 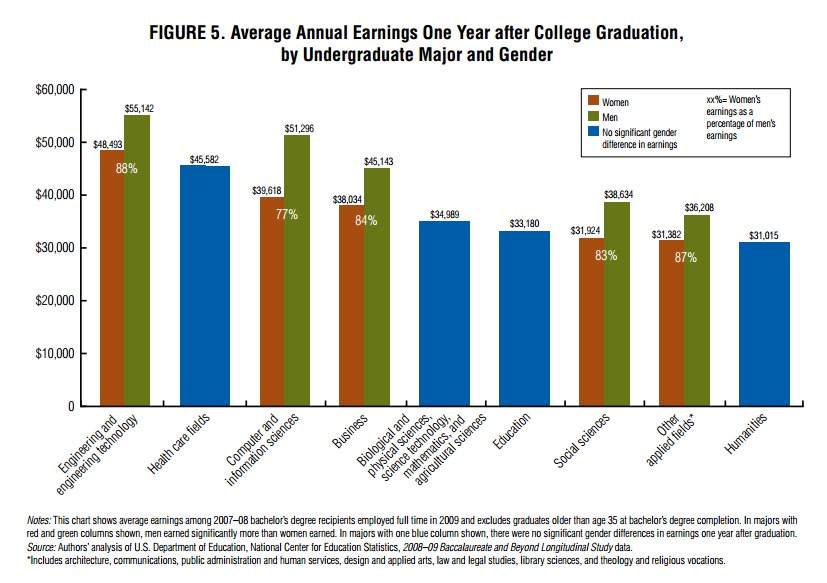 The above chart comes from The American Association of University Women (AAUW) which has conducted comprehensive research into the gender pay gap. Founded in 1881, their mission is toadvance equity for women and girls through advocacy, education, philanthropy, and research.

You might expect the pay gap between men andwomen in this group of workers of similar age,education, and family responsibilities to be smallor nonexistent. But in 2009the most recentyear for which data are availablewomen oneyear out of college who were working full timeearned, on average, just 82 percent of what theirmale peers earned. After we control for hours,occupation, college major, employment sector,and other factors associated with pay, the paygap shrinks but does not disappear. About one third of the gap cannot be explained by any ofthe factors commonly understood to affect earnings, indicating that other factors that are moredifcult to identifyand likely more difcult tomeasurecontribute to the pay gap.

The AAUW report Graduating to a Pay Gaphas the rest of the goods.

Look, the gap is taking too long to close. It's like an ulcerated lesion on the buttocks of this country. It's high time to:

Maybe the gender pay gap will never go completely away. After all, it's 15% even in Utopian Sweden. That doesn't mean we can't do everything possible to narrow it as much as possible.

What's your idea to narrow the gap?

What about the spending gap? It seems to be lots more massive.. women control 80% of US spending.. i.e women spend 4 times more than men.. and presumably a whole lot of that money is earned by men.. their boyfriends, husbands, fathers.
A whole lot of culture is is all about men spending money on women.. buy all sorts of crap for Valentine’s day etc , ultimately in exchange for sex. Women use their sexual power like hell.
Marketers know about this.. and design shopping malls to display women’s goods front and center.
http://www.fastcodesign.com/1663594/women-dominate-the-global-market-place-here-are-5-keys-to-reaching-them

It seems to me that discussing only womens “problems” without discussing the corresponding mens side of things is disingenuous.

@AstrokidNJjI hear your view. I don’t think that 80% is spent on manicures and Louboutins however. Women still do a majority of household management, pay the bills, grocery shop, clothe the family etc. Savvy marketers know who holds the purse strings. I saw this on TV this morning and did more head shaking.http://abcnews.go.com/blogs/entertainment/2013/04/sexy-sells-hunk-heats-up-new-kraft-ad.

But then you also have One Million Moms upset over the sexy plumber commercialhttp://lezgetreal.com/2012/02/one-million-moms-upset-over-racy-liquid-plumr-commercial.

Unfortunately, my post was not about the spending gap it was about the wage gap. Most minority males statistically also earn less than white males.But, it’s really interesting you bring up Asian women – they, like Asian men tend to bust through all minority trends in wage gap statistics. Like you, I have never found myself paid less than my male peers. These are averages and not blanket figures. Sometimes it’s good to be the exception not the rule.

FWIW.. I am not a white guy and in my 10+ yrs working in IT in the US, I have been “underpaid”, as well as “overpaid”.. ALL depending on the company I worked for, the fortunes of the company, the fortunes of the market, my negotiation skills with my boss etc. While I was resentful at the time of being underpaid.. in retrospect I see it all balanced out in the long term.. there is never perfect justice. One’s exact value in the current job can only be determined by the employer via experience.. and takes time.
I found no intent to discriminate by my bosses.. and plenty of white guys AT MY OWN EXPERIENCE LEVEL earned less than me (simply because I was more capable and valuable to the company at that time). We also had a couple of very bright chinese-american women work in our IT group, and if anyone suggested that their sex played a role in determining their compensation, my boss would laugh.