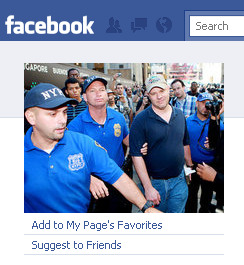 Derek Fentons 11-year career with NJTransit went up in flames when photos of him burning torn pages from a Quran at a protest outside Park51on September 11 appeared in newspapers. He was heard saying If they can burn our flag we can burn their Quran - as he ripped and lit.

And indeed, after police detained him they let him go without charges filed against him. He had exercised his freedom of speech. So, why was he let go from his job?

"NJ Transit concluded that Mr. Fenton violated his trust as a state employee and therefore [he] was dismissed."

Fenton attended the protest during non-work hours. Its probable that his First Amendment rights were violated, according to Christopher Dunn, Associate Legal Director of the New York Civil Liberties Union.

Without having a copy of the NJTransit at my disposal to review, I suppose its always possible that his employer deemed his behavior as a violation to some safety protocol, perhaps danger of inciting retaliation in the form of explosives planted on a train or bus. Nonetheless, he was off work and his expression is protected by the First Amendment.

I think most people would sue for wrongful termination in this case, and if the ACLU has his backside Fenton might have a good chance at some type of award or settlement. I personally would never want my job back at the place I had been fired from. On the other hand, I wouldnt conduct myself in a manner that could cause greater harm than good. But, thats just me

In the meantime, Fentons friends have set up a Facebook Fan Page to help him get a new job. It doesnt have many fans but as we all know, it only takes one.

What do you think of this guy's behavior and do you have an example of an employer mandating off work behavior?

While I do NOT condone burning of anyone's religious materials, or The American Flag, or any other significant item – this man did not deserve to be fired. There have been numerous American Flag burnings around this country for years and I have never heard of anyone being fired for it. Which brings to mind another point and question. You can burn an American Flag and it's called Freedom of Expression or whatever – but, when you burn pages from a Qur'an – it's grounds for firing?

Brenda – This reminds me of the argument (which seems to have faded in large part recently) about social media. the question being, if you see someone in a photo on a social media site drinking or nude do you dismiss them as a candidate? It was on their own time… I think it's what companies are looking at under the umbrella of discretion.. If someone lacks it in their personal life should the company take the risk they will have it professionally? It certainly is a question for the court… and I would still love to see the employee handbook (though it could easily contain something that wouldn't be held up in court).

I agree his expression is protected by the First Amendment, But today we live in a millisecond of information and you can become an instant celebrity for good or bad just that quick. Want your 15 seconds of fame? Go do something great, like raise money for charity. Burning a flag or holy text or whatever in hate/spite isnt the leadership trait NJ Transit s looking for in their employees.

Amos – On all levels I feel this person could have channeled his courage and energy in more productive expressions of his opinion. I would like to talk with him and get his perspective before and after.. However, even if I were to contact him I'm certain his attorneys have told him mum's the word until after court..

Very well written great article “Off Work Conduct Unbecoming of an Employee?” thanks!!!!!