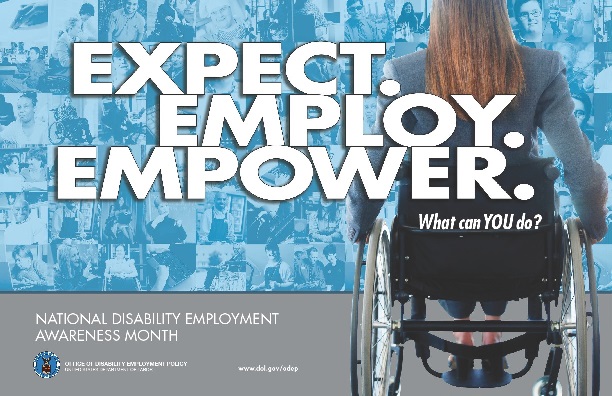 This month I'm celebrating my 3rd year anniversary helping people with intellectual and developmental disabilities learn about, enter and retain employment. So, I decided to throw my own little celebratory blog party right here by sharing my thoughts on the next challenge in employment.

Working age people in the US with disabilities

The most recent data comes from 2012, the last time the American Community Survey was conducted. That year, the national unemployment rate hovered between 7.9 and 8.3 percent.

10.1% - Percentage of working age residents with any type of disability

66.8% - Unemployment rate for non-institutionalized individuals with a disability

76.8 - Unemployment rate for non-institutionalized individuals with a cognitive disability

Those with invisible disabilities who can maintain a level of health that permits working generally hide their disability pre-employment because they fear disclosing it would cost them the job offer - regardless of the protection afforded by the ADA. Candidates with visible disabilities often wonder why they face rejection when they are qualified, not knowing if it was the stigma of being disabled, or there was simply a 'better' candidate. For those with disabilities that impose significant limitations on physical and or cognitive abilities, or require significant medical attention and care, work may remain a long-term goal that may or may not ever be reached.

There are many governmental programs to employ and promote employment of people with disabilities, and many Fortune 500 companies have gone gung ho with initiatives to employ wounded warriors, but the numbers are still appallingly low. The new Federal mandate for government contractors to staff 7% of their workforce with disabled individuals will help to make it better. However, that percentage goal still does not reflect the percentage of working age residents with disabilities of any type in the general population, which is 10.1% - I would love to know where they plucked the goal of 7% from.

The greatest challenge in employment is to integrate those with cognitive disabilities, particularly those intellectually and developmentally disabled - who are in general good health and eager to work, into the workforce, especially when this type of disability is significant.

It can be done

On a happy note, the days of segregating the intellectually disabled into 'sheltered workshops' replete with sub-minimum wage (as little as pennies per hour) - a practice that has roots back to the darkness of the middle ages, are numbered.

When the physically disabled, 'indigent,' and those who were mentally different were herded into asylums in the 1700's, they were being brought together not to ameliorate their conditions, but simply to get them off of the streets. (Disabled World -Sheltered Workshops: History and Definition)

Along with the 7% rule, President Obama issued an Executive Order in February of this year to increase minimum wage for Federal contractors / sub-contractors to $10.10 - to include employees with all types of disabilities. Together, these two rulings should significantly decrease unemployment of those with disabilities while increasing their likelihood of earning a living wage more of a reality. However, it remains to be seen if these rulings will incentivize or cause Federal contractors to hire people with cognitive impairment. And what about non-governmental contractors, the rest of corporate America? Will they follow suit voluntarily or wait until sub-minimum wage is outlawed and the 7% rule becomes the ADA standard (hopefully)?

The 2014 DiversityInc Top 10 Companies for People With Disabilities

We need to keep going...

That top 10 list looks delicious and enviable but it begs the question, how many of those hires include candidates with intellectual or developmental disabilities? Let's face it, no one wants to get picky about or discriminate amongst disabilities - there is no room for this one is worse or better (there will be no dinging for stepping up to the plate). The employee without use of her lower extremities can do your accounting, the guy who is hearing-impaired can do a mean job in your warehouse, and with adaptive technology the person who is visually impaired can be your company CEO. But, what kind of job can the person with an IQ below 70 do at IBM, or the employee with autism at The Hartford Financial Services Group?

Well, since you asked...

Employers have a lot of choice, not only when it comes to candidates, but also creating minority friendly culture, sourcing minority vendors, building and modifying facilities, etc., to include crafting job descriptions. Customized employment is a very important strategy to explore for the company that wants its workforce to reflect the demographics of the community it resides in as closely as possible. It's a flexible process designed to personalize the employment relationship between a job candidate and an employer in a way that meets the needs of both and is based on an individualized match between the strengths, conditions, and interests of a job candidate and the identified business needs of an employer. Customized Employment utilizes an individualized approach to employment planning and job development one person at a time . . . one employer at a time.

Customized employment will often take the form of:

One of the best customized employment stories I am aware of takes place in a gym. A young adult with a developmental disability had the dream of working in a gym. His job coach went to several gyms to see if there might be an opportunity. After interviewing one gym owner, she discovered that a laundry service picked up and delivered towels every other day. After some quick calculations, she discovered that the cost of a washer, dryer and laundry detergent, plus minimum wage for the candidate would be less expensive - and he would have time to wipe down equipment while loads of towels were washing and drying. The young man got the job, the job coach was authorized by vocational rehabilitation to train and work with him until he got up to speed, the gym had a new friendly face and the owner had more time to run his business..

Now, celebrate with me by doing your part!