For a several years now, northeast Pennsylvania, fondly known as NEPA, has flirted with a high tech reputation. Stories about being a mini Silicon Valley and back up for Wall Street have had some residents holding their breath only to be disappointed when they exhaled. Somecompanies have made it to the big time and we have developed a budding start-up culture. There is an annual tech business plan competition and a .Net user group which also hosts the annual TECHbash.

There are a growing handful of marketing companies proficient at that 'semantic personal publishing platform with a focus on aesthetics, web standards, and usability' - aka Wordpress, who have gone through Facebook marketing training, loaded up their multi-account Twitter client apps, created Vertical Response accounts, and muddled through how to integrate new media into their clients' campaigns somewhat successfully, if not in templateassembly linefashion.

There is also a DIY contingent of bloggers, a smattering of itimpressively at theearly adopter level, out of which morphed awell maintained digital regional blog directory(though come on guys, it really is time to migrate off of Blogger, and get branded with a serious logo and design) of many blogs and several serious bloggers. We know one another through Twitter, Facebook and LinkedIn groups, Tweet ups, the semi-annual political blogger BlogFest meet up, and the occasional podcast.

One evening in March of 2012 over a Google Hangout, a digital designer pixie, a SEO goddess, a blogtastic IT engineer and a networked new media change agent musedabout how to bring these groups together to get NEPA more digitized.They made a virtual pact to be the Fearsome Foursome and created the first ever blogger and social media conference in the region, NEPA BlogCon.

NEPA BlogCon 2012 is excited to announce its website launch and will be hosting a launch party on Friday, June 22, 2012 from 5 to 7:00 p.m. at River Grille in Plains, PA. This marks the first of many events leading up to Northeastern Pennsylvania's first blogging conference.

The Launch Party will include free appetizers, door prizes, giveaways, and a chance to network with NEPA BlogCon organizers and attendees. Its a free event, but attendees can make a suggested $5 donation.

NEPA BlogCon is a daylong conference and networking event to be held at Luzerne County Community College on September 29, 2012. It's designed to bring together bloggers of all experience levels, as well as those interested in marketing, social media, and communicating through the internet. All proceeds will benefit The Arc of Luzerne County & the NEPA Veterans Multicare Alliance. Tickets are on sale on at an early bird special price of $35 the month of June.

NEPA BlogCon is a creation of the Fearsome Foursome because we love NEPA. We are: Leslie Stewart (@darlingstewie), Michelle Davies (@mhryvnak), Karla Porter (@karla_porter) and Mandy Boyle (@mandyboyle).

NEPA BlogCon is presented by Everest Printing and is hosted by the Luzerne County Community College Computer Club. The NEPA BlogCon Launch Party is sponsored by River Grille. 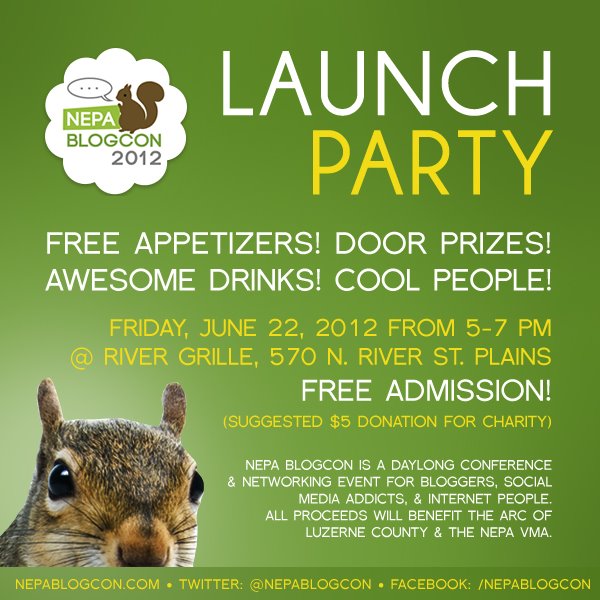 Previous article
How do you tote your Gigabytes?
Next article
The Wisdom of the Ys: How Millennials Make the Job Market work for them