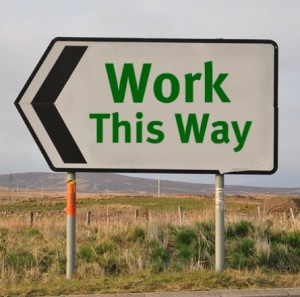 In June of this year I wrote about my thoughts on the growth of a 1099 Workforce. To cap the year I want to expand on that post with some additional thoughts, provoked by an article I read on Measuring Economic Development Without Depending on Jobs . I posted the link on a discussion board at the PROS in Workforce and Economic Development group on LinkedIn a month ago and it sat there until today someone bit the juicy apple and said she recently worked with two companies that said they expected to grow in 2011 but doubted that would mean any new hires..

Maybe it's time to begin measuring success in economic development differently. Maybe the sheer number of jobs isn't really the metric we should use.

I don't know William but we must be cut of the same cloth, at least in the way we think about this topic.

The many efficiencies thus far created via technology already affect the workforce significantly in some sectors to include government (Telework Enhancement Act of 2010). I envision, the future of work will likely see still increased fluidity and flexibility, job sharing managed by partners in the household, the return to more one income families as couples rotate work and childcare responsibilities, and a move to significantly more contract versus "employee" relationships until one day that is the exclusive work relationship.

Down the road I see "total benefits" being a package the worker is responsible for purchasing much like car insurance + AAA that is portable from one job to another and effective during times between contract work, and not the employer's responsibility. It will include health care, paid vacation, unemployment compensation insurance - which will no long be called that but perhaps something like Contract Gap Insurance, and a host of other a la carte optional features based on price and preference. Maybe even fitness club memberships will be factored in to lower the price.

Companies will pay a fee based on competitiveness of talent which will be gross because they will not be responsible for carrying these associated costs. Talent agencies will evolve to include broker services contracted by the worker to manage these products in a one-stop capacity. I see the future of talent as a source of energy like other types of energy companies purchase based on a negotiated competitive rate by those who will deliver it the fastest at the highest quality.

With this scenario companies would be able focus on their growth using competitive exclusively outsourced onshore (and I suppose increasingly offshore) talent. I recognize this is not the typical FTE body count thinking we are accustomed to and might be viewed as a bizarre construct - but I posit that we need to retire the big box employment model where widget makers punch clocks and understand we are post industrial revolution and into the networked age. This in no way means we won't continue to manufacture, it just means workers will own their careers and their time.

Why shouldn't you own your career not your employer?

It makes sense and I think hiring 1099 employees could help the business as well as become a good tool to recruit strong talent. As a 1099 myself, I enjoy the benefits that comes with it. I have the freedom I want to choose when, where and how perform my tasks as well which allows me to be much more productive. I also like the idea of choosing the benefits/perks that I want. The best part of it is my ability to make time I need to oversee various aspects of my own company. People who are professionals should have the opportunity to manage their careers how they see fit and I feel 1099 structure allows that. Good post, Karla. Thanks.

Thanks for the comment Larry! As more unemployed launch their start ups, opt for 1099 gigs and do not return to traditional employment – our unemployment rate numbers will never be accurate again. We are going to have to figure out a new system to track those with earned income. Maybe the IRS will end up reporting how many people have earned income vs. those who don't within the working age demographic. That would be so much more accurate!

Karla, I think you are on track with your thinking about “jobs” and economic development. I have been thinking also that workers tend to work for an industry sector or cluster and not truly for an “employer”. What I mean is that there loyalties and intersst tend to be more to the sector and nnot the individual employer. Their career ladder is not vertical so much as latticed. They climb a career lttice or network and not a vertical ladder.

Tom, thanks for your comments. I agree it’s not uncommon that many workers indubitably follow latticed careers as their professions fit neatly into a track, their networks become strong and they become proficient with the technospeak, earn reputations, etc. I on the other hand hold no allegiance. I like variety way too much.

Tom- Wow sorry I missed your comment for 5 months! I think you have a solid thought process on this, ‘career’ for today’s worker is what they do not who they do it for..