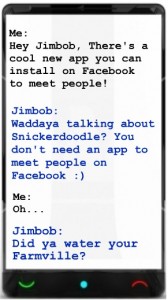 The fairly large network I have on Facebook has been all a buzz this week - leading up to the SHRM conference in Las Vegas, with BeKnown - the latest in a trail of a new shiny badge badge earning, network growing apps. This time, the developer is not an unknown avant garde start up. It's Monster.

I have resisted all the annoying inadvertent auto invites from my friends because I'm already connected to them, I can find candidates without a Facebook app and I have been down this path with other well intentioned similar apps - most recently BranchOut, which I was slightly interested in at first, have never used and have stopped accepting invitations to. It shares many similarities with BeKnown.

The only other piece of critical analysis I have seen this early in the 'game' is from Jason Buss at TalentHQ. By the way, the comment left on his post left me with a funny feeling, kind of like when I post something positive about my Blackberry Playbook and the iPhone squad converges on me.

Giving credit where it's due, I applaud the great timing. Many of my peers are holed up on a man made oasis in the desert collecting vendor swag and blogging away between speakers, many about BeKnown (and doing other things that I'm sure will stay in sin city). Monster can count on them to recruit plenty of joiners. Like cult members, my contacts are joining, joining, joining...

You'll have fun competing with your connections to see who has the best badges.

Facebook is fun, or serious, or fun and serious depending on how you use it - but do we really need to earn badges and compete with our friends based on work history, education, size and composition of our professional network and endorsements weve given or received?

I have mental images of a swarm of bees.. I'm going to stay behind this time I got stung once and it meant a trip to the ER. If it turns out I'm being ridiculously narrow minded I'll put my big girl pants on, self-inject some epinephrine and blog an apology - but I highly doubt that will happen.

You guys have fun collecting and comparing your badges for being professionals. Been there, done that in Brownies.

Have you by chance read Maren Hogan’s post on the “gamification” of work?http://www.marenated.com/(Pay or Play?). I have to admit that I jumped on the BeKnown game wagon as soon as I saw the tweet stream from Vegas. I don’t get it much, either, but here’s the deal: I’m afraid to be left out. I suppose I could wait and see if it becomes a must, but I really would prefer to already be on by the time I am forced to be. I don’t care about badges and such, either – but I do care about being connected to those people who won’t use Facebook because they hate the inability to segregatae family, friends, and work.

Joan – I have been meaning to tell you how much I love your new pic! I just read Maren’s post. I will comment on it too. Call centers have used this instant reward strategy forever and I used to offer up SPIFF’s to the time share sales staff – would actually stand on the sales floor with a wad of money in the morning and walk around passing it under their noses saying ‘smell this… you want some????” Maybe we need to walka round professional offices will pockets full of magnet badges. Did you fill out your new emergency contact form yet? Great, here’s a badge!

I don’t want to work in that place Joan… BTW, I am connected to a lot of people on LinkedIn who want nothing to do with Facebook. This app isn’t going to change them.. They will still have to create a profile.

We’ll see what happens and I’m willing to hold my breath. Thanks for stopping by and commenting!

Karla,
It would have been a little easier to have a few drinks with the gang in Vegas and stroke some egos.. Kudos for not falling for the “game changing” flavor of the month social recruiting solution.

Jason – Sometimes I plant my feet and rebel. Nice to see you here =)