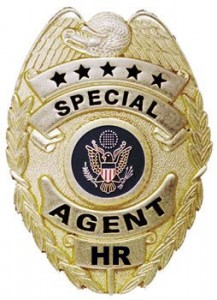 How does an entity that largely operates behind closed doors get out the word of its good works and command trust at all levels of the organization, not just the C- Level? I'm seeing more and more practitioners talk of recognition and respect, the lack of it and how to get it.

Good works and help behind closed doors go on everyday in Corporate America but it can't always be recognized in traditional ways, hence the closed doors. C knows what is going on and says good job over the speaker phone and that's it. You might be expected to understand that your recognition comes by retaining your employment, qualifying for and receiving a COLA increase at the end of the year and feeling special when ATS, HRIS vendors and Staffing Agency end of year chotchkies show up... if the Receptionist doesn't sack them before you ever see them. Due to the confidentiality of so many HR missions, they're never heard of again except in the most generally unrecognizable terms over a Cosmo on Hump Day.

Why do we care? Why do we think we need recognition?

Some of it could be because we are people too and we want recognition just like everyone else, though some people sure seem to need more of it than others. The most important reason is that it's about trust and buy-in. Because freaking people out when HR requests their presence and being thought of as company police is counter-productive. It's about moving and shaking the employer brand, attracting talent, retaining the talent you have, so much more than warnings for dress code violations.

When HR creates and drives policy with an iron fist, is responsible for keeping health care premiums low by forcing people to go to health fairs in the cafeteria, is required to act in so many ways as the unofficial legal department, administers benefits and ends up involved with the most personal information and secrets people are required to divulge to employers on that nasty FMLA, STD and LTD paperwork, knows and in many cases recommends everyone's salaries, is privy to transgressions and administers their discipline, and gets "rid" of people, among so many other highly sensitive and fundamentally critical functions, is it really a wonder why staff is afraid of what is perceived so often as the KGB.

For departmental reputation and PR I think it is important during orientation and other opportune times to plug the fact that because a high degree of confidentiality is required with many situations that end up in the HR offices many of the good works it does will never be known. This is precisely why I was nicknamed "Secret Agent Porter" at my last job.

Sometimes while barreling down the hall and I could hear staff... "There goes Secret Agent Porter, wonder what she's up to now!" It was exciting and glamorous, like the life of Agent 99 or Natasha... people would run interference for me at the drop of a hat, all I would have to say was "Hey guys, I'm on a mission, would you please defer traffic down the other hall?" They would rather miss a meeting than let someone through until I relinquished them from duty while the authorities escorted someone out without anyone's notice. They received thank you cards or email from me. Everyone was a deputized HR Assistant. It was fun, they weren't afraid of me. Staff would stop by, ask if there were any "missions" they could help with. I would always come up with something to keep them engaged, happy and feeling appreciated.

It's also important to ensure the department is recognized in visible ways when it can be and is appropriate. When the IT department is doing rocket science and getting bagel baskets from C, if you put up fliers around the building for "Blood Pressure Screening" everyone is just going to laugh. Timing is everything and it is largely up to the creative genius of the HR team to do things right and do the right thing - at the right time. Testimonials from satisfied internal customers - voluntary not under duress are best- are good in the company newsletter. If you can manage to save someone's life or career and get it on video or a podcast for the company Share point site you are an HR Rock Star.

Regardless of how conservative and brown shoe the organization is we work for, we made a decision to accept the mission. There is always a way to be creative, give and earn trust, show and garner appreciation and recognition but it calls for innovation and leadership not following like blind sheep. Sometimes it means plotting a concept, creating a business case and persistence to take it to decision makers. It can mean being told no and having to have the wherewithal to take it back to the drawing board, rework it and present it again if you really believe in your idea. It might mean lobbying others with similar ideas, forming an exploratory committee over Cosmos, getting buy-in and going in as a team with representatives from all levels of employees and departments.

It means having entrepreneurial spirit, owning your work, believing in your ideas and being an agent of change to make them happen.

Maybe I'm jaded but I have been fortunate to feel trusted, appreciated and valued by my internal and external customers and partners.

What is the level of trust in the organization you're with? How can you influence it?

Great post Karla-I love the “Secret Agent Porter” tag! The part about employees whispering as you passed by reminds me of all the times staff would do that with me. My response? Since when did I become your father?

On the flip side, when I was a HR project manager I was referred to as the resident “priest” of the project team. When a teammate approached me and wanted to talk my first question was, “Collar or no collar?” It helped to maintain the cohesiveness of the team to have that one person that could keep their secrets.

Every department has its less than glamorous side. We need to focus on doing our jobs, and doing it well, before we can focus on awards and recognition.

Previous article
Who’s Gonna Hire Me?
Next article
I’m About Done With “Un”