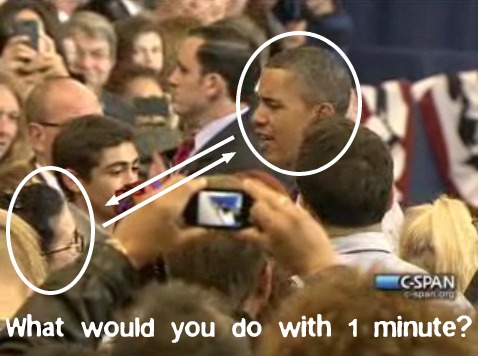 Through affiliation with diversity initiatives in my community in Wilkes-Barre PA, I was afforded the opportunity to obtain some tickets to attend the President's American Jobs Act talk yesterday in Scranton. I quickly requested enough tickets for my colleagues from The Arc of Luzerne County and The Arc of PA who work out of the office.

Among other things, we advocate for and have a huge interest in employment opportunities for people with disabilities. We are working to develop a two-year work readiness program for people with intellectual and developmental disabilities and autism. In this economy, when it's often difficult for fully abled people to find meaningful suitable employment, the opportunities for those who may need special supports in the workplace remain slim. It was important to be there.

As a representative of NEPA Veterans Multicare Alliance, it was important to be there too, in support of the freshly signedVeterans Opportunity to Work to Hire Heroes Act of 2011.

Have you ever been to see President Obama speak? It's an all day event full of anticipation, rules, traffic, parking, waiting and security, culminating in beautiful patriotic music, the Pledge ofAllegiance, an undesired invocation, introductions and finally a 30 minute speech - full of passion, important issues, congeniality, humor and the ask to urge your Congressman to sign the American Jobs Act.

We were fortunate to have tickets that put us in the front row.

Without a doubt, the most urgent challenge that we face right now is getting our economy to grow faster and to create more jobs. we cant wait for an increasingly dysfunctional Congress to do its job. Where they wont act, I will. President Barack Obama

The night before when my distraught mom called to ask me if I knew what the President did and then proceeded to tell me he signed a bill that would re-enact horse slaughter in the US - I said 'Well, if I would get a chance to speak with him I would ask him about it because I have a hard time believing he would do that." I searched, found articles in the media, felt confused and went to bed.

I ask what you would do with one minute - because as the President hopped off the stage and made his way toward us to shake hands I contemplated just saying nice to meet you Mr. President - like everyone else seemed to be doing, commenting on one of the many job or economy related things on my mind -or seizing the moment completely off topic and being ignored but keeping a promise I never actually thought I would ever have a chance at. I went for seizing the moment as he shook my hand with a conversation something like:

Thank you for passing the Hire Heroes Act Mr. President but I am very disappointed you signed the bill to slaughter horses....

The bill you signed on November 18 that enables horses to be slaughtered in the US.

I don't know about that and I think I'm pretty good about knowing what I sign.

Well, you did and it's all over the media.

I'm going to to check that out, that doesn't sound right.

OK, I'll follow-up with you on that, thanks.

And I'll follow up because I don't believe he realized that H.R. 2112's bland language would indicate to anyone it wasreally about horse processing a.k.a. horse slaughter.

In any event, I was pleased to have the opportunity to seize the moment by voicing my concern right to the top.

I'll let you know the result of the follow-up.

P.S. Congress needs to pass the Jobs Act. Call your Congressman today and insist.... there isn't a moment to lose.

Previous article
The Drop Down Technique for LinkedIn
Next article
Should more conditions be tied to jobless benefits?