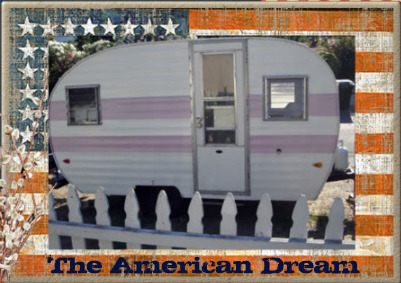 I swear not an hour has gone by all weekend with out a mention of the 2010 Metlife Study Of The American Dream. I wasn't asked to participate and I don't know any of the 2,243 people who did. But, according to the study, two thirds of Generation Y more than any other cohort said they define the American Dream as family and children.

Boomers and Silents feel the American Dream is a comfortable retirement according to the study. The American Dream Coalition says it's a home with a yard and an automobile. Princeton defines it as the widespread aspiration of Americans to live better than their parents did.

95% of Gen Y compared to 53% of Baby Boomers feel they will achieve the American Dream in their lifetime. It's a matter of having a family and children versus a comfortable retirement as your objective...

That dream of a land in which life should be better and richer and fuller for everyone, with opportunity for each according to ability or achievement. It is a difficult dream for the European upper classes to interpret adequately, and too many of us ourselves have grown weary and mistrustful of it. It is not a dream of motor cars and high wages merely, but a dream of social order in which each man and each woman shall be able to attain to the fullest stature of which they are innately capable, and be recognized by others for what they are, regardless of the fortuitous circumstances of birth or position.

What does the American Dream mean to you and do you feel you will achieve it in your lifetime?

Good post, Karla. My interpretation of the American Dream is “whatever one wants it to be.” No particular set of circumstances, no order – just whatever you want that dream to be. And anyone CAN achieve it. It seems the real trick is figuring out what you want yours to be while you are still young, and the road to the dream is the self discipline, maturity, patience and dilligence to see it through. Achieving the dream is golden no matter what stage of your life it finally happens.

You're right B if I can't live the perfect life like Barbie then I might as well live my own and not worry about the Smiths. World domination a la Karla.

Great Post Karla- To me, The American Dream is to be Happy, Healthy, and to LOVE what you do. Give more than receive, Volunteer to help champion Causes that matter to you. Live Passionately, Love deeply, and Be Authentic. The important thing is to go after what you want and sieze the moment!

That's a wonderful life for sure Shennee. But let me ask, is there anything different in that than our Canadian neighbors, Australians or Belgians are dreaming? What makes it the “American Dream”?

Both my fiance and myself are from Gen Y. Her American dream is to have a nice home and a family containing two children. That is great, but my dream would to have a career that allowed me to spend time this them and be able to support them financially.

Knorekfl – That's an interesting observation. More interesting is that the Silent Generation's dream hasn't changed since their youth. I think the American Dream both you and your fiance envision is classic – and I wish you both every success in achieving it!

Previous article
Farmville is Better Than Hate Spam
Next article
When They Search You Who & What Will They Find?