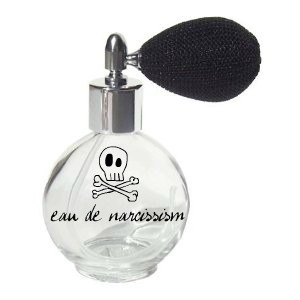 Dealing with her leaves one wanting sleep and a blood transfusion....

She kills morale, scatters groups of people, causes involuntary eyeball rolling, sudden headaches, causes spontaneous cancellation of meetings, people to call out ill and if allowed to continually spew her bile she paralyzes creativity and breeds apathy. Because no one wants to hear it, emotionally wrestle with her, deal with her or even have her know they exist.

It's what she wants even if she doesn't know.. self-awareness is not one of her competencies and she thrives on having control or the perception of having it.

She must be performance managed out because she has bathed ineau de narcissism, the stench is polluting your organization, the odor will not wash off and it's driving others away.

There’s one in every office 🙂

Mandy – And when you deal with a lot of offices you get to meet a lot of them =). I love the way the little perfume bottle turned out!!

Everybody has a drop of :Narcissistic perfume in it,the need of being admired,beautiful.Some take /ask this aggressively , some just wait calmly…