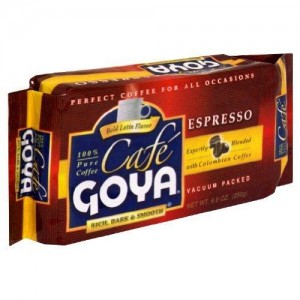 On the way home from work yesterday, I knew that if I didn't stop at the grocery store for cat food and paper towel I would regret it and without a brick pack of Goya rocket fuel I would not have a very pleasant morning. Soon after entering the store, while trying to thaw out near the heat of the poor rotisserie chicken I couldn't bear to look at, I had a great moment when I looked up and saw someone I hadn't seen since I left my job at the corporate cookie cutter script camp.

I got to hear a high level overview of how most everyone has fled - yes, during a recession, and due to the same, the vacancies were not back filled. A small mass hire of underpaid front line ninjas are slated to be hired in the New Year and the last ones standing can't wait for them to get up to speed so they can bail on the over stressed mean and nasty manager without guilt of leaving the place empty. Sigh....

I pushed back the temptation to comment, knowing my energy would be better spent on the blog post dancing in my head like sugarplums, for the benefit of those who might read it. We vowed to find each other on Facebook and never lose touch again.

Viva, the best paper towel in the US, made its way into my cart and I made my way to the check out. I could see past the two people in front of me that the cashier had spent a good deal of prep time embedding a reindeer antler headband into her intricately contrived up do. Every piece of over processed hair that wasn't broken off was strategically aqua netted into place. I tried not to stare but then figured that was what she was going for so I gawked as I wondered if she would ever get it out without having to shave her head. I vaguely remember catching Paula Deen on a magazine cover claiming to have the most delicious cookie recipes and then out of the corner of my eye another outrageous claim:

You can learn to love your job

My wonder at how people get paid to write drivel was only superseded by thoughts of how this was similar to Patty Hearst learning to love her stint with the Symbionese Liberation Army. Let's call a spade a spade...

All jobs have elements that are more appealing and less so... Take my lack of love for the annual benefits open enrollment process and pig squealing delight at every opportunity I get to talk with college students about their career development, as concrete examples. Nonetheless, my job has so many wunderbar things about it that I don't even have to think twice about if I love it or not. I do, in a matrimonial kind of way.

The week I was discharged from the Air Force I went to the State (un)employment office and the Veterans Rep wrote a name and address on a piece of paper he signed and handed me - "He'll give you a job". As hugely grateful as I was, I could only package freshly made rubber bands for 2 days before I was gaga... I talked to people during the 10 minute breaks we got when the whistle blew that had been there 25 years making pencil erasers and running the box folder and got hives. I felt badly but I had to go up to that nice man and tell him I wasn't coming back.

There was nothing, I mean nothing, no savvy journalistic technique to be had that could have made me love that job.

Let's leave the sugar coating for the gingerbread cookies...

PS... No, I do not get fringe benefits for recommending groceries, please stop your wild imagination.

Good one, Karla. Shopping with you must be a hoot 🙂

Brenda – I'm a label reader (no animals in my food!) and as you may have seen, I like to tweet pics of interesting things I find in the store. I was SO tempted to take her pic and tweet it but couldn't figure out how to approach that…