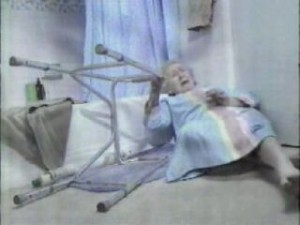 Even the elderly woman in the LifeCall commercial knew she should rely on technology when she fell and couldn't get up. It's disparaging to have validation yet once again that an apparent cosmic vortex continues to usurp the minds of many and prohibit advancement. Today in one local online news outlet the story is With social media, local politicians skeptical.

There are five compelling reasons a political candidate, just like a candidate for any other job, would use social media that immediately come to mind.

First, it provides reach otherwise unattainable. Think of the people you missed being able to have a pierogi with at that bazaar or those babies you weren't able to kiss. How much would it cost in mainstream media buys to reach everyone you couldn't shake hands with in person?

Second, it shows constituents you understand how to communicate in today's digital world. A large segment of the voting population want a leader who is modern and isn't Flintstonesque (that includes me by the way). I stopped buying news in print years ago so if that's where you are I'm not seeing you. A diversified strategy to reach as many people as possible means more votes. Some are here, some are there, you need to be everywhere...

Third, it provides an additional and very effective real time method to measure public opinion. The analytics available should be very attractive to someone running a campaign - if they care about public opinion. It allows you to be in charge of tweaking your rhetoric message. Not seeing enough response from a particular constituency? Engage them purposefully with content important to them and then measure the result to ensure you have persuaded them and they support you.

Fourth, the fact is that social media is "media". It's independent media that is 100% controlled by the content creator and provides immediate access to constituents. If I were a candidate I would be working diligently with my campaign manager to drive my message to as widespread an audience as possible, not crossing my fingers waiting for coverage by traditional media with little or no control over content or frequency.

Last but not least, it's FREE. Regardless of one's political party persuasion, the value of social media in the last presidential campaign can hardly be denied. On a smaller local level it can be emulated through the use of social media on a $0. budget. It would be great if the public didn't have to dole out money to elect a good local leader, wouldn't it? I know I would respect one who figured out how to serve before solicit.

Social media campaigns can be executed anywhere there's a zip code, so even a mayoral candidate in a small town can do it. Candidates for large major elections have a campaign manager savvy enough to hire someone with social media campaign management experience. Politicians running local campaigns don't need live CNN.com streamed townhall meetings linked to Facebook chats to effectively engage. Candidates for small elections should enlist the help of someone with a history of using social media successfully for marketing to get set up and take a lesson from them on how to navigate and update.

A good campaign manager helps with the time management aspect of daily updates, which in all reality need not take more than 15 minutes to be effective once the profiles are set up (though personally, I would have a very robust social media campaign with a dedicated manager/volunteer if it were mine).

I respect public officials who promote and engage in open communication, even if it is managed by a staffer. If I were an elected leader I would give mainstream media plenty of competition by continuing to use it post election to manage my communication with constituents.

Thank you Shanx – This is an oldie but goodie and now that it is campaign time again I’m going to roll it out a second time!