Today, I was in search of a customer care email address for Verizon Wireless because I wanted to electronically submit comments in writing. Comments polite though direct, and much too lengthy for a chat box, or a tweet.

Is that too much to ask a Fortune 100 company you have spent many thousands of dollars with over the years?

After sifting through the Verizon website, probing support chat, and connecting with the Twitter team, it was revealed and confirmed that there is NO customer service email address that I could avail of - only a postal mail address, FOR A TECHNOLOGY COMPANY, no less. 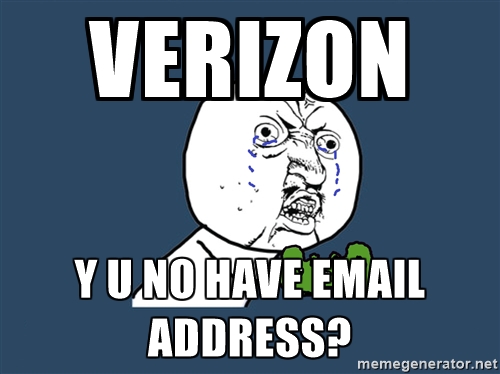 Being a solution oriented individual, I kindly offered to utilize my website to post the letter and send the link to hard working team manning the @VZWSupport Twitter account. Shout out to ~AS, ^EMW, and *EP - I know it's not your fault personally, you're working for the man and don't set the policy.

If I told people they could not email the company I work for they would laugh at me..

And so I too am laughing. And frustrated. And disappointed.

At least I could attach the letter in a document to the contact form at LG.com. The way they installed the motherboard in the device is piece of work - but at least they let me submit my letter digitally.

Verizon did not. So here it is.

To Whom It May Concern:

One year and one day from the date of purchase of my device at a Verizon Wireless store (meaning yesterday) it went to sleep, refused to wake up and will not properly boot up, in an endless cycle of LG and Verizon screens and powering down by itself – that never ends. I took it to the store I purchased it from at 10am when the doors opened, and after an employee attempted and failed at a hard reset, told me I would be sent a certified like new refurbished model overnight -because I pay a monthly fee for extended warranty (http://www.verizonwireless.com/support/device-replacement-program/), to be sent overnight - which means, the phone I use for work wasn't available last night, today and tomorrow until the replacement is received. Here are my concerns for which I am deeply dissatisfied with LG, the manufacturer:

I am greatly disappointed in the guarded, secretive nature of how this known issue is addressed. I am not satisfied that I will receive a refurbished device – when I have taken the utmost care of my own LG G4, there is not one scratch on it.

Finally, I can’t reinforced enough how truly displeased I am, so much so that I feel compelled to take my valuable time to write this letter to let LG know.

I am losing my mind with this, and very quickly, my entire life. I am a ride share driver and obviously need a working phone to earn a living. My G4 went into BOOTLOOP on 10/31/17 after numerous sparatic bouts previously from which it temporarily recovered but that had rendered it unreliable already. When it was no longer recovering (10/31/17) I borrowed a friend’s phone to call Verizon and after 95 minutes on the phone they sent out a replacement. FIVE days later I finally received the replacement and installed my SIM, battery, SD card and back cover. When I attempted to power it up, the replacement did the same thing: showed the LG logo and vibrated then went black and proceeded to loop until the battery was dead. Being without any working device it took me several days to be able to borrow a phone again to call Verizon. This time I spent over 2 hours on the phone with tech support. I went through every suggested action, learned how to reach the Boot Screen and got it to begin the activation process. After about a half hour of this, the replacement device lapsed into the same bootloop and was unresponsive to any input at all. So tech support offered to send me a second replacement and told me that it was a software issue that was stored on my SD card so for me not to install my SD card in the 2nd replacement phone they were sending. Again, FIVE days later I received another G4 after some lame excuses from FedEx claimed they couldn’t get into my building (UPS got in just fine) I ended up having to take a bus to pick it up from the FedEx office. I got it home, left out the SD card and it did the SAME boot loop. All of this time, about 25 days at this point, I haven’t been able to earn a living AT ALL. So it took me another week, but I finally was able to borrow an IPhone 5s to activate on my phone number but for a limited time as my friend needs it back. Being an Android user, I know nothing about IOS and had to establish an Apple ID just to use it temporarily and still can’t work. Yesterday, Dec 5, I spent another two and a half hours on the phone with Verizon. First, with financial services, because they were threatening to disconnect my service due to my bill being past due. Then, with Customer Care trying to get a reduction on the bill in consideration of the fact that I’ve been unable to use my service – which they deducted $80 of the $220 bill (not a lot of help considering) – and finally to tech support AGAIN to try to get them to send me a device that works. I’ve been a loyal Verizon customer for eleven years, paid for the top insurance at $9/mo the whole time (which comes to roughly $1,188 to date), and have been caused irreparable financial harm by this PREVENTABLE nightmare and still am fighting for a solution. So I tell tech support that I’m DONE with LG, never want to buy or use any of their products again and request a COMPARABLE replacement by another manufacturer and they tell me they can’t do it. Being that I’m not due for and upgrade for another six months, it would cost me about $130 to upgrade at this time. I had already told them I was destitute as a result of not being able to work without a reliable phone and went on to explain that I was now being evicted because no income meant no December rent money and they apologized, saying all they could do was refer me to LG for repair. So they put me on the phone with a very fast talking LG rep with a thick Indian accent who referred me to lgmobilerepair.com. Upon going to that website I was asked for not only the phone identification number and carrier information, but also proof of purchase, purchase date and receipt – which due to other tragedies in my life over the year and a half since I bought the phone from Verizon, I have none. Plus a pop-up notified me that I would have to pay shipping, $20 for them to even look at it (diagnostic fee) and a minimum of $79 to fix it UF it was an electrical or electronic issue. Being as I am penniless, I am incredibly distraught and am about to lose my mind. It feels like Verizon and LG are hanging me out to dry and my entire existence is about to end. Is there anyone who can help? I’m out of resources, all is lost and I’m at the end of my rope…. thanks for listening.
Sincerely,
Laurel D Briggs
Los Angeles, California

Oh my goodness that sounds like a Stephen King novel! I totally feel your pain and I’m happy to listen and commiserate. I hope you’ll send your comment to https://www.lg.com/us/support/email-appointment and call both LG and Verizon out on social media. I know I’m going to post it for you! I certainly hope it’s resolved satisfactorily for you. The only spare phones I have are an old BlackBerry Pearl and a Z10 but if you need a different phone in the meantime I can send you one. Much better to use than an iPhone (I have both a personal Android and a work iPhone so I get it). Now that being said, I am on my 3rd LG G4 (the original and then 2 replacements). I haven’t had the boot loop issue again, but the camera on the 2nd phone DIED and so it was replaced yet again. When the LG G4 isn’t possessed it’s great… I’m due for an upgrade but I have been putting it off because my phone is working fine at the moment. I would get a basic little phone for voice and texting, and use my work phone for Internet and social media – except that like I mentioned…. I am not an iPhone fan at all. I find it obscene to pay almost $1000 for a phone and then the plan on top of it and then go through the mess you are experiencing. Good luck!