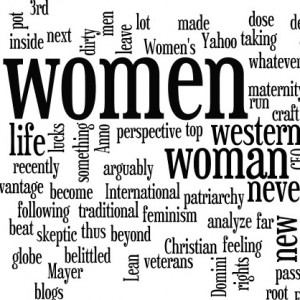 Over the past year voices telling me the right way to be the right kind of woman have become very loud - and no, they are not coming from inside my own head.

If you're not a 3rd wave feminist you're not a not a feminist at all. Egalitarianism has taken root and prospered, and the word 'feminist' is no longer necessary, pass, and even dirty. Feminism has men feeling belittled, threatened and taken advantage of to the extent they've created their own movement to defend their male goodness and rights.

Most recently, while I was at a conference for women military veterans over International Women's Day weekend this year, I witnessed the timely launch of a book and website by Sheryl Sandberg, arguably a woman who has achieved it all - with a hefty dose of criticism over her Lean In Circles as being akin to 1970's pot lucks. This following Marissa Mayer under the spotlight for taking maternity leave as the new CEO of Yahoo, saying having a new baby in her life wasn't as difficult as she'd been told, as she had a nursery built next to her office - something not accessible to most women on their climb to the top.

Fundamentalist Christian mommy blogs talk about women's lives in very traditional puritan terms and biblically mandated gender defined roles while they craft and cook with one baby on the hip and others in the play pen. Muslim women fight to uphold their cultural traditions of modesty. FEMENprotest sextremism topless around the globe and skeptic feminists proclaim the patriarchy and its privilege twist the arms of women into subordination, as if through the divine right of Adam.

When Ianalyzemy own path thus far, I see a someone who does not come from privilege, has marched to the beat of her own drum, made non-traditional decisions, never felt boxed in beyond choice, never once thought her existence is what it is because she is a woman (except for some mild gender role conditioning as a child) - and is happy.

How are you doing?

NeilBytes Just in general, managing their lives the way they want without hindrance by the patriarchy.

karla_porter if these women are influenced by their fathers, that’s there business…

NeilBytes Partiarchy as in men – the larger global definition.

I enjoyed this but I have nothing to contribute, except saying that it is often the case (at the very least with gender) that the perception of oppression is more oppressing to the perceiver than any actual oppression that is occurring. Not a very eloquent way of saying it, but I expect you’ll get the drift.

@Rocko2466I can think of different circumstances where oppression is perceived to be as bad as it actually is – but with the scenario of female gender oppression in western countries, eh not so much. Thanks for reading and your comment.

I’m with you. Instead of reasonable critical thinking, it seems all we get now from feminists (many of them) is “privilege” this and “privilege” that. As if you’re supposed to feel more privileged, and less privileged, depending on what ethnicity, gender and nationality you happen to be a part of.

I like to think my own choices thus far (I’m young) has been that I’ve treated people (not just women, but people) as equals. To some I’ve been a bastard, to some I’ve been a saint, to some I’ve just not cared enough about. It’s all relative. But to the ones I’ve actually cared enough to address, I’d like to think I’ve been kind, fair, made sure to ask if anyone needs anything at the shop, been sure to ask politely when asking somebody a question, been sure to apologize if I bumped into anyone, and so on. Simple things. I haven’t been more fair to some and less fair to some based on their race or gender, I haven’t been more fair or less fair to some based on their beliefs. Equals. Obviously I’ve not yet made my mark as you have, Karla, but you know, baby steps. 😉

I would love it if more women had your view on privilege (the same as Abbie, Renee, Scented, etc) instead of thinking they ought to be victims of social norms. Most of which doesn’t even exist. (Read: patriarchy, rape culture, etc) Where would we be as a society if we all thought we fit to a social norm and should stick to it? We’d be stuck in the stone age, dragging females to our cave after bumping them with our large mace. I thought raging against social norms was the point of the women’s rights/civil rights eras, but maybe they were just supposed to set the stage where they could be used as eternal bargaining chips. Or blackmail.

@pitchguestHey Pitchguest! I agree with you about your thoughts onof the women’s rights/civil rights eras, and I still think there is work to be done. I’m just not necessarily a fan of the direction some people think it should go in. But then, maybe that’s the beauty of living in the western world. Everyone who wants to can have a platform, grab a blog, Twitter account and have at it. In the end, we end up toward the center of most issues – no matter how radical some groups or people are. We self-normalize as a society. Thanks for your thoughts =)