A boy and his father are in a car driving when the car crashes and the father is killed. The boy is taken to the hospital and needs surgery. The surgeon looks at the boy and says "I can't operate on this child, he is my son". Who is the surgeon? Think about that for a moment and then watch the video...

Were you surprised like I was about the answers the 5th grade students gave? I was surprised by their answers but fascinated by their body language, open, seemingly non-judgmental and accepting. It's a great example of how one's belief, attitude and perception are formed by environmental factors. Adults who were asked the question tended to stick to traditional answers - perhaps what they observed as children - men are surgeons and children have one father.

I think there is a message here that goes beyond a gender riddle...

As you can see, the video doesn't work anymore but obviously it used to. I saw it and so did a couple of my readers who commented. It doesn't load if you go to the abc site either <-- Don't they watch for these things? I tried to do the right thing by sending a message with an explanation to the site help desk. This is the canned email I got back:

Thank you for writing to the ABC TV network regarding the video player on ABCNews.com.
Here is some information that should answer your questions:

For optimal playback experience, your computer should have at least 512 MB of RAM, a video card with at least 128 MB of RAM and a high speed internet connection (DSL or cable modem).

Again, thank you for writing. We appreciate your feedback!

Note: The Companys long-established policy does not allow us to accept for review or consideration any ideas, suggestions, or creative materials not solicited by us or our subsidiaries. Therefore, in the event that you have submitted such content, please be advised that the submission has been forwarded to the Companys legal department for handling.

This email has been sent to you from an outbound email account that will not accept inbound mail. Therefore, please do not respond to this email.

My intent to provide you with quality posts without having to hire my own camera crew hasn't ended. Here's today's chess move - I can't wait to see if it works. 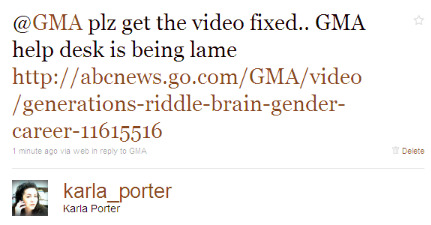 that was pretty cool

Gorilla Atheist – It is cool, I have great feelings about today's youth. I love going into schools as a guest speaker and hanging out with kids at the local youth center.

I love this Karla and sadly, am not surprised but loved the openness to a variety of outcomes that the kids had!

thanks for sharing,
Shannon

So, Audrey was kind enough to let me know the video is no longer working.. ugh. I have sent a love letter to abc News tech support and hope all will be well soon. I'm very sorry for any inconvenience =)