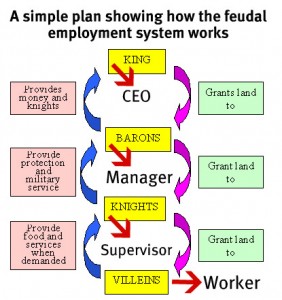 "The King was in complete control under the Feudal System. He owned all the land in the country and decided who he would lease land to. He therefore only allowed those men he could trust to lease land from him. However, before they were given any land they had to swear an oath to remain faithful to the King at all times. The men who leased land from the King were known as Barons, they were wealthy, powerful and had complete control of the land they leased from the King. " - History on the Net

If you change the titles around, does this sound like where you work?

I believe that we are slowly transitioning to a 1099 workforce (the entire country) and it makes a lot of sense. Currently, we have a very old model feudalistic system in place where most people are at the mercy of the employer for things like benefits and training and largely they do not own their careers.

It's not really a smart approach.

The days of looking to an employer as a provider and almost parental figure in our lives are diminishing. Standing loyally at a machine for 40 years in exchange for a paycheck and health care is likely to be a thing of the past.

"Villeins, sometimes known as serfs, were given land by Knights. They had to provide the Knight with free labour, food and service whenever it was demanded. Villeins had no rights. They were not allowed to leave the Manor and had to ask their Lord's permission before they could marry. Villeins were poor."

This recession has created the impetus for an increase of micropreneurial ventures, co-working arrangements, solopreneur consultancies, freelancing and multi-career employment. In my opinion, this trend will continue. As health care reform emerges and individuals have portable insurance policies they can choose to own no matter where they are or what they do in life, they will also be paid through a payroll service who will be authorized to invoice the company for services performed by their client.

Workers will own their careers. Landing a job will become even more highly competitive as people bid on projects for anything above minimum wage, negotiating rate, schedule, time off (unpaid), etc. Workers will be paid at higher rate because taxes and benefits will be their own responsibility and not a cost for the company who will be known as a client.

Perhaps it's time for another peasant uprising.

What are your thoughts on a new employment model or are you happy the way it is?